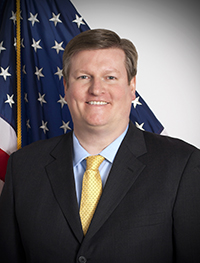 Russell A. Heisner, Warden at MCC Chicago, has been honored by the United States Marshals Service (USMS) as the recipient of the Law Enforcement Officer of the Year Award. This prestigious award, one of the highest honors granted by the USMS, recognizes "a state, local, or federal law enforcement official outside the U.S. Marshals Service who has made a significant contribution to their mission. The recognition may be for either a specific act or service, or for assistance and cooperation over a period of time."

The Law Enforcement Officer of the Year Award recipient is usually an individual who provided tactical assistance to the USMS in support of a fugitive or investigative operation. However, in recognition of his accomplishments in prisoner and detention management that directly impacts and provides benefits to the USMS, Warden Heisner was selected from nominees from across the country who had also made extraordinary contributions to the USMS.

MCC Chicago Warden Heisner established a cooperative relationship between the Federal Bureau of Prisons (BOP), the USMS, and the Federal Court (Northern District of Illinois), and made major contributions in prisoner and detention management allowing for substantial savings to the USMS during a time when they projected a $200 million shortfall. MCC Chicago is a 700-bed, administrative detention center that houses mostly pre-trial inmates, with a small work cadre. Warden Heisner introduced a series of countermeasures to accommodate housing additional USMS pre-trial detainees which resulted in savings associated with USMS transportation services, as well as costs borne by the Court for appointed attorney travel between downtown Chicago and outlying county jails.

Warden Heisner's achievements serve as a model for how other BOP institutions can build cooperative relationships and strategies to reduce costs for greater taxpayer value, while simultaneously providing an important service to the larger law enforcement and judicial communities. Warden Heisner is to be commended for his efforts and is deserving of this recognition and honor.